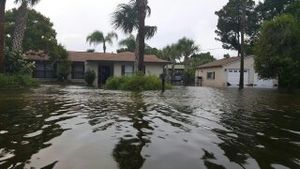 Welcome to sunny Florida other wise known as ground zero for hurricane season 2016. This year’s hurricane season has already been extremely unforgiving by most Floridians standards with 2 Hurricanes already causing extensive damage on both coasts. First there was Hurricane Hermine that flooded most of the Nature Coast on September 2nd. Roads, homes and many businesses saw between 2-4ft of floodwaters that took nearly 12 hours to recede and most residents were without power for days. It had been nearly 23 years since the Nature Coast experienced anything remotely close to the flooding that we saw on this date. To say the least most waterfront residents of Crystal River, Homosassa, and Ozello were all caught off guard by this modest category 1 Hurricane (including myself).

Hurricane Mathew, the second hurricane to hit the sunshine state this season was the first major Hurricane to make landfall in Florida since Wilma in 2005. Ironically, enough most of Florida’s west coast dodged a major bullet as the bulk of the category 4 winds were held about 20 miles offshore. It’s hard to imagine that 20 miles can be the difference between a major loss and complete destruction but in the case of hurricane Mathew that was exactly the case. 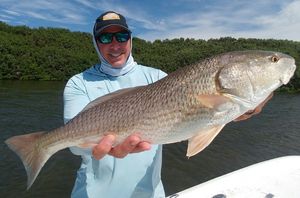 So what exactly does all of these hurricanes mean for Nature Coast and Florida fishing in general? Well as crazy as this sounds these hurricanes will actually help jump start a number of great bites on both coasts. Heavy winds and rain will help oxygenate our warm local waters that had become stagnant due to the summer heat. The added bonus of copious amounts of rain will drop water temperatures enough to send many inshore game fish including Redfish, Speckled Trout, Snook, Sheepshead, Black Drum and Flounder into their fall feeding patterns. During these transition periods anglers will find that many of these same species will congregate in similar areas where strong fall tides will wash shrimp and baitfish through structures ranging from spoil island points to oyster bar cuts. Casting and retrieving suspending baits such as Mirrolure Mirrodines, Sebile Stick Shads, or DOA Baitbusters will entice a majority of these inshore species and the fact that these lures will allow anglers to cover a ton of ground is a real added bonus. 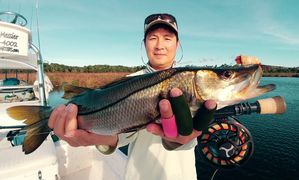 Mr. Tung made the long trip to Crystal River from Taiwan and was rewarded with this Nature Coast Snook on a Gurgler!!

For those anglers looking for an awesome near shore bite, NOW! is the time to hit our local waters in search of this years last run of Spanish Mackerel, False Albacore, Cobia, Sharks and Bluefish. Running and gunning from feeding frenzy to feeding frenzy is one of my favorite styles of fishing found along our coast. Acres and acres of threadfin herring, ballyhoo, and needlefish have already begun balling up in anticipation of their offshore run for the winter and as these schools of baitfish swell in numbers and size many of the pelagic species that frequent our area through out the year will be ready and waiting. Jack Crevalle and Ladyfish are normally the first species on the scene to terrorize these bait schools but as the fall season kicks into high gear all of the Spanish Mackerel, Bluefish, and False Albacore that an angler would ever want to catch take over many of our Speckled Trout flats and turn them into bait fish massacre zones. Casting spoons is the surest way to get a bite but for those anglers that love throwing a fly or may want to pick up a fly rod for the first time this is a bite that every fly angler must try. Long accurate casts are NOT necessary when you are targeting acres worth of fish, so just getting a cast out with a strip or two is all that is needed for a hook up. Baitfish patterns such as Clousers, Deceivers, and Schminnows are the three best patterns that every fly angler wants to make sure they have in their fly box for this bite. 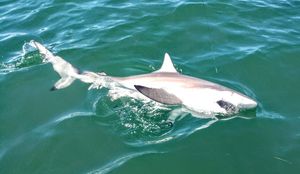 So although this years Hurricane season will be the talk of the Nature Coast for months and years to come it will be the great fishing that will keep anglers talking about the present. And with better weather and fishing to come I for one cannot wait to find out what the rest of our Spring season has in store for us.

ALL THE BEST TO THOSE AFFECTED BY THE 2016 HURRICANE SEASON! I KNOW WHAT YOU’RE GOING THROUGH.